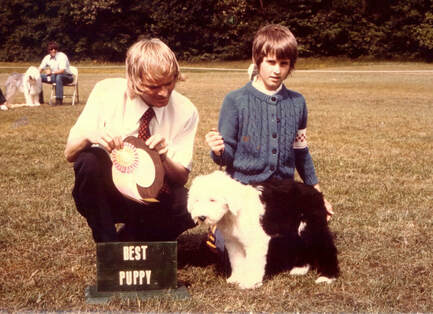 ​The last 40 years of my life have been dedicated to the sport of purebred dogs.  Even as young child, I realized how incredibly fortunate I was to grow up in a family that bred, showed and loved Old English Sheepdogs. With our first OES, from a backyard breeder, we made all the mistakes a first-time puppy buyer can make.  We did have the wisdom to join our local OES club after the fact and quickly learned Alfie was NOT show quality, and with his health and temperament issues, he sadly was not even companion quality.  But we learned from this, and were were bitten by "the bug."  A few years later we acquired a beautiful female Old English Sheepdog we named Mimsy, who would ultimately become the foundation of London Fog OES.

became my Mom's right hand and her student, sharing the responsibility of exhibiting, breeding and caring for our dogs. I had my first "big win" at age 8 with Tiffany (Ch. London Fog's Touch of Class, left), going on to compete seriously in both the junior showmanship and breed conformation rings, while volunteering for our local club in Pittsburgh, PA, and assisting with the breeding and raising of about fifteen litters of puppies. From my Mom, I learned the importance of carefully screening puppy buyers, and that temperament and health should never take a back seat to what might win in a show ring.

​I was always a studious kid, but the dogs were my life and my passion.  And they were even instrumental in helping me get into Princeton University.  When my counselor called to the various schools to whom I'd applied, just to "check up on my status," at the mention of my name she would usually hear something like "Ah yes! The girl who wrote all about her dogs!"
​After I lost Gina, a dog that left incredibly large footsteps to fill, I began to think about a change of breed.  Naturally I wanted another large breed, even bigger than the OES (as I was getting older too, it was now or never to take on a giant breed).  While I had mastered the art of grooming the OES, I wanted a more "honest" dog with nothing to hide.  I found that in the majesty of the Greater Swiss Mountain Dog.

​I welcomed my first Swissy puppy, "Axel", in April 2004. By the time I'd shown Axel to his championship, I knew I'd been bitten by yet another bug. In September 2005, my incredible "Moxie" came to join us and I realized quickly that she was everything a Greater Swiss Mountain Dog should be.. A year or so later, I was hoping for a female from  different bloodline proven to be very healthy and chock full of breed type and soundness. Nature didn't cooperate, as there were no females in Kathy Spencer's repeat Alli x Blaze litter.  But one of the boys in that litter was just too good to pass on, and so "Bowie" came to join us from outside Houston, TX in 2007.

​Bowie rocketed to his championship the day he turned 10 months old, was the #3 ranked Swissy in the country (#1 Owner-Handled) in 2008, and finished 2009 as America's #1 ranked Swissy in breed points for 2009 -- the first GSMD to accomplish this owner-handled!  The following year I repeated this unlikely task, piloting a boy I co-owned "Shea" to the #1 Swissy in the country for 2010.  We have enjoyed many more thrills:  Moxie taking Best of Opposite Sex to Best of Breed at the 2010 National Specialty, Shea winning the Top 20 at the 2011 National Specialty and taking Select Dog at the 2013 National, and the biggest of all...Shea winning Best of Breed and Bowie taking Select Dog, Best Veteran and Best Stud Dog at the 2014 National!